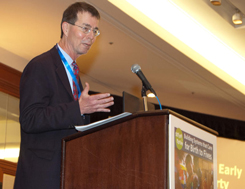 If life is a map of paths, then young children raised in poor families will have a difficult time staying off the road that leads to stress, health problems, crime and poverty as an adult, according to several studies cited by Greg Duncan, an author and University of California, Irvine education professor.

Many studies show correlations between the earnings of a young child’s family and their own outcomes, Duncan said. However, Duncan said experimental programs that help parents of young children succeed result in better lives for those kids, versus those that provide only assistance, like food stamps, or direct services for only the children. “Income support matters a lot for families with young kids,” Duncan said.

For example, the New Hope Work Support Program, a three-year program that began in 1995 for two of Milwaukee,’s poorest neighborhoods, randomly assigned half the families who participated to the program while the other were given access to regularly-available government assistance services. The New Hope program required the adult participants to work 30 or more hours a week, but provided supports such as childcare and health insurance subsidies, temporary jobs and support from staff.

The study, co-authored by Duncan, found that the New Hope families worked and earned more, at least while the program was running. Children of the New Hope families spent more time in child care or after school programs than the control group counterparts, and overall performed better in school, said Duncan, who believes families with young children should receive a tax credit.

The conference featured workshops, presentations and panel discussions on topics ranging from austism and developmental disorders to grief and maltreatment. Father Gregory Boyle, founder of Homeboy Industries, was honored for his work helping children and families.