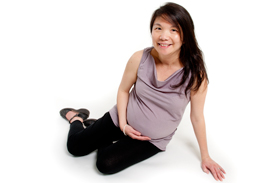 If you're pregnant, you've no doubt been given a list of foods to avoid – undercooked meat, soft cheeses made from unpasteurized milk, and alcohol, to name a few. The good news is that there is a food you should have more of while pregnant and while breastfeeding: fish and shellfish. The latest science shows that eating fish low in mercury during pregnancy and in early childhood can help with growth and neurodevelopment. It can also be good for your health.

That's why the Food and Drug Administration, or FDA, and the Environmental Protection Agency, or EPA, have issued draft revised advice encouraging pregnant women, those who might become pregnant, breastfeeding mothers and young children to eat more fish – and to eat a variety of fish lower in mercury.

An FDA analysis of data from U.S. pregnant women surveyed about seafood consumption showed that they ate far less fish than the 2010 Dietary Guidelines for Americans recommend. In fact, 21 percent of the pregnant women surveyed said they ate no fish in the previous month. Of the women who ate fish in the previous month, 50 percent reported eating fewer than two ounces a week, and 75 percent reported eating fewer than four ounces per week.

“We're updating our advice because the latest science strongly indicates that eating eight to 12 ounces per week of a variety of fish lower in mercury during pregnancy benefits fetal growth and development,” said FDA's Acting Chief Scientist Stephen Ostroff, noting that FDA reviewed research from the last decade.

The FDA and the EPA have issued draft revised advice encouraging pregnant women to eat more fish – a variety of fish lower in mercury.

Ostroff adds that eight to 12 ounces is an excellent range to maximize the developmental benefits that fish can provide. The science behind that recommendation was not available when the FDA last issued fish consumption advice in 2004.

The new draft advice recommends that women who might become pregnant, along with pregnant and breastfeeding women, eat at least eight ounces and up to 12 ounces weekly, which is two to three servings. This draft advice also extends to young children, although the amounts you serve them should be proportionally smaller.

Which Fish Should You Eat?

Fish and shellfish (collectively called “fish” for this advice) have high-quality protein, vitamins and minerals, and omega-3 fatty acids. Fish also are mostly low in saturated fat, and some have vitamin D. Eating fish during pregnancy, while breastfeeding, and in early childhood can be especially important for a child's growth and development.

The entire package of nutrients that fish provide may be needed to fully benefit fetal and child development. For this reason, consumers who avoid eating fish and instead take omega-3 supplements may be missing out on the full beneficial effect. Plus they miss out on other nutrients in fish that support overall health.

Eating a variety of fish helps ensure that most fish you eat will be lower in mercury. Most fish found in grocery stores are, in fact, lower in mercury, including many popular species such as shrimp, pollock, salmon, canned light tuna, tilapia, catfish and cod.

What About Mercury in Fish?

Fish do take in methylmercury (a form of mercury), and nearly all fish have traces of it. At high levels, methylmercury can be harmful, and developing fetuses can be especially sensitive to it. Young children may be sensitive as well.

Eating a variety of fish, as the FDA and EPA are recommending, will help ensure that most fish you eat will be lower in mercury. However, the FDA and EPA are also recommending that women who might become pregnant, or who are pregnant or breastfeeding – along with young children – should try to avoid the four types of commercial fish with the highest levels of methylmercury: tilefish from the Gulf of Mexico, shark, swordfish and king mackerel.

If you or someone you know goes fishing in a lake, stream or river, follow local fish advisories. If local advice isn't available, you should eat six ounces or less of these locally caught fish per week, and children should eat no more than one to three ounces per week.