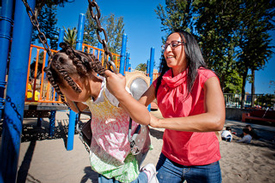 Just more than half of preschool-aged children go outside to play with their parents daily, and whether or not they do often depends on factors like the child’s gender, the mother’s ethnicity, if parents work outside the home and having playmates, according to a study published in the journal Archives of Pediatrics & Adolescent Medicine .

“Preschool children’s physical activity does not usually occur as a planned, structured activity. Instead, they have short bursts of vigorous activity that are followed by less-intense recovery periods,” according to the report from researchers at the University of Washington. “Young children are likely to achieve physical activity through play, which is also essential for their growth and development.

Physical activity helps kids to maintain a healthy weight, but outdoor play may also be beneficial to motor development, vision, vitamin D levels and mental health, among others. “In spite of these manifold benefits, U.S. children today likely spend less time playing outdoors than any previous generation,” the report states. “As society has changed, so has the way parents spend time with their children.”

The report is based on data collected during the Early Childhood Longitudinal Study-Birth Cohort, which tracked the same 10,700 children born in 2001. Of the study sample of 8,950 preschool-aged children, 60 percent had mothers who worked outside the home, 79 percent of whom reported that they exercised no more than three days per week, if at all. More children (58 percent) were likely to go outside and play with a parent if they were not attending regular child care or staying with an adult other than their parent, the study adds.

The odds of a child playing outside daily with a parent or under supervision of a parent were:

The researchers made a correlation between a mother’s employment status and how much a child plays with her outside, finding that logistics and time keep children from playing outside. Researchers found no evidence that excessive screen time was related to reduced outdoor activity. The National Association for Sport and Physical Education recommends at least 60 minutes of physical activity each day.

To spark some ideas on where to take your child for some outdoor time, we’ve included a list of ideas for finding open spaces and play areas in L.A. County: