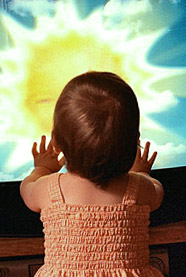 Five-year-olds who watch TV for three or more hours a day are increasingly likely to develop antisocial behaviors, such as fighting or stealing, by the age of 7, indicates research published online in Archives of Disease in Childhood.

But the risk is very small, say the authors, who additionally found that time spent playing computer/electronic games had no impact on behavior.

Prolonged screen viewing time has been linked to various behavioral and emotional problems in children, say the authors, but most research has focused exclusively on television, and almost all of it has been carried out in the U.S.

They wanted to explore what psychological and social impact time spent watching TV and playing electronic games might have on children between the ages of 5 and 7.

They included a representative sample of just over 11,000 children, all of whom were part of the Millennium Cohort Study, which has been tracking the long term health and development of U.K. children born between 2000 and 2002.

When they were 5 and then again when they were 7, the children’s mothers were asked to describe how well adjusted their offspring were, using a validated Strengths and Difficulties questionnaire.

The moms were also asked to report how much time their children spent watching TV and playing computer and electronic games at the age of 5.

When they were 5, almost two-thirds of the children watched TV for between one and three hours every day, with 15 percent watching more than three hours. Less than 2 percent watched no TV.

But at this age, they spent considerably less time playing electronic games, and only 3 percent spent three or more hours engaged in this activity every day.

After accounting for influential factors, including parenting and family dynamics, watching TV for three or more hours a day was significantly associated with a very small increased risk of antisocial behavior (conduct problems) between the ages of 5 and 7.

But spending a lot of time in front of the TV was not linked to other difficulties such as emotional problems or attention issues. And spending time playing electronic games had no similar impact, the analysis showed, although this might reflect the fact that children spent less time playing games than they did watching TV, say the authors.

They point out that the links between heavy screen time and mental health may be indirect, rather than direct, such as increased sedentary behavior, sleeping difficulties and impaired language development, and that the child’s own temperament may predict screen time habits.

But they conclude that their study “suggests that a cautionary approach to the heavy use of screen entertainment in young children is justifiable in terms of potential effects on well-being, particularly conduct problems, in addition to effects on physical health and academic progress shown elsewhere.”