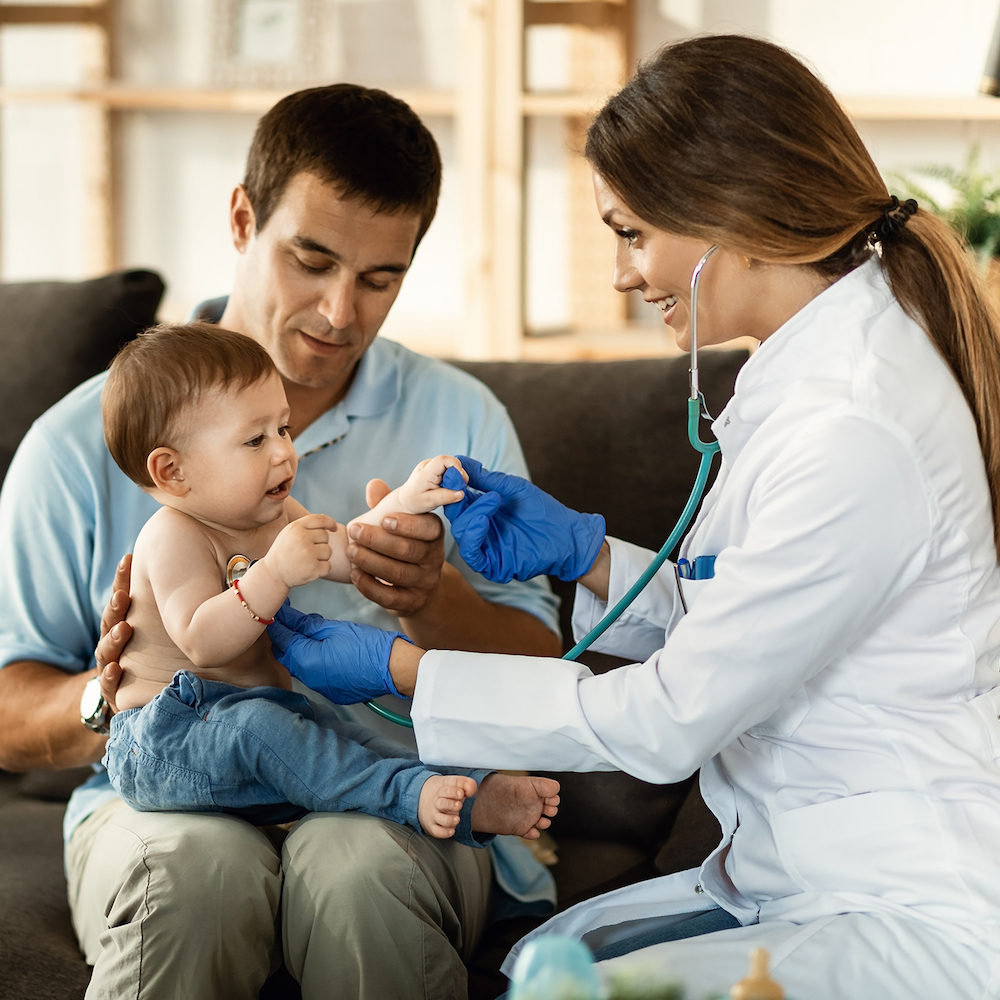 Pediatric clinics now have a free, practical toolkit designed to strengthen screenings through effective practices that better detect developmental delays, such as Autism Spectrum Disorder, in babies and toddlers. 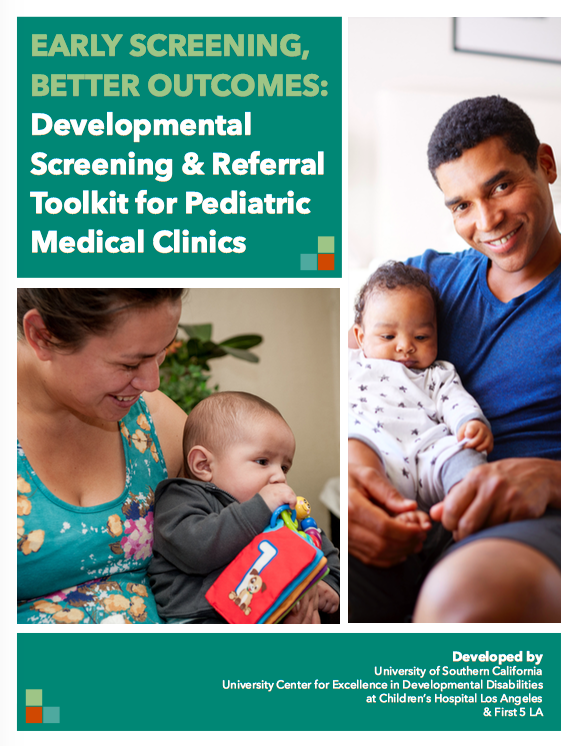 The toolkit, the first of three to be designed to support different types of agencies in embedding developmental screening and linkage for young children, was unveiled this month at First 5 LA’s First Connections Forum. The online conference was attended by nearly 60 people involved in the field of early childhood health.

More than 64,000 screenings of babies and toddlers have been conducted since First Connections began in January 2014, said First 5 LA Executive Director Kim Belshé. These screenings are carried out by six agencies around the county with funding from First 5 LA. 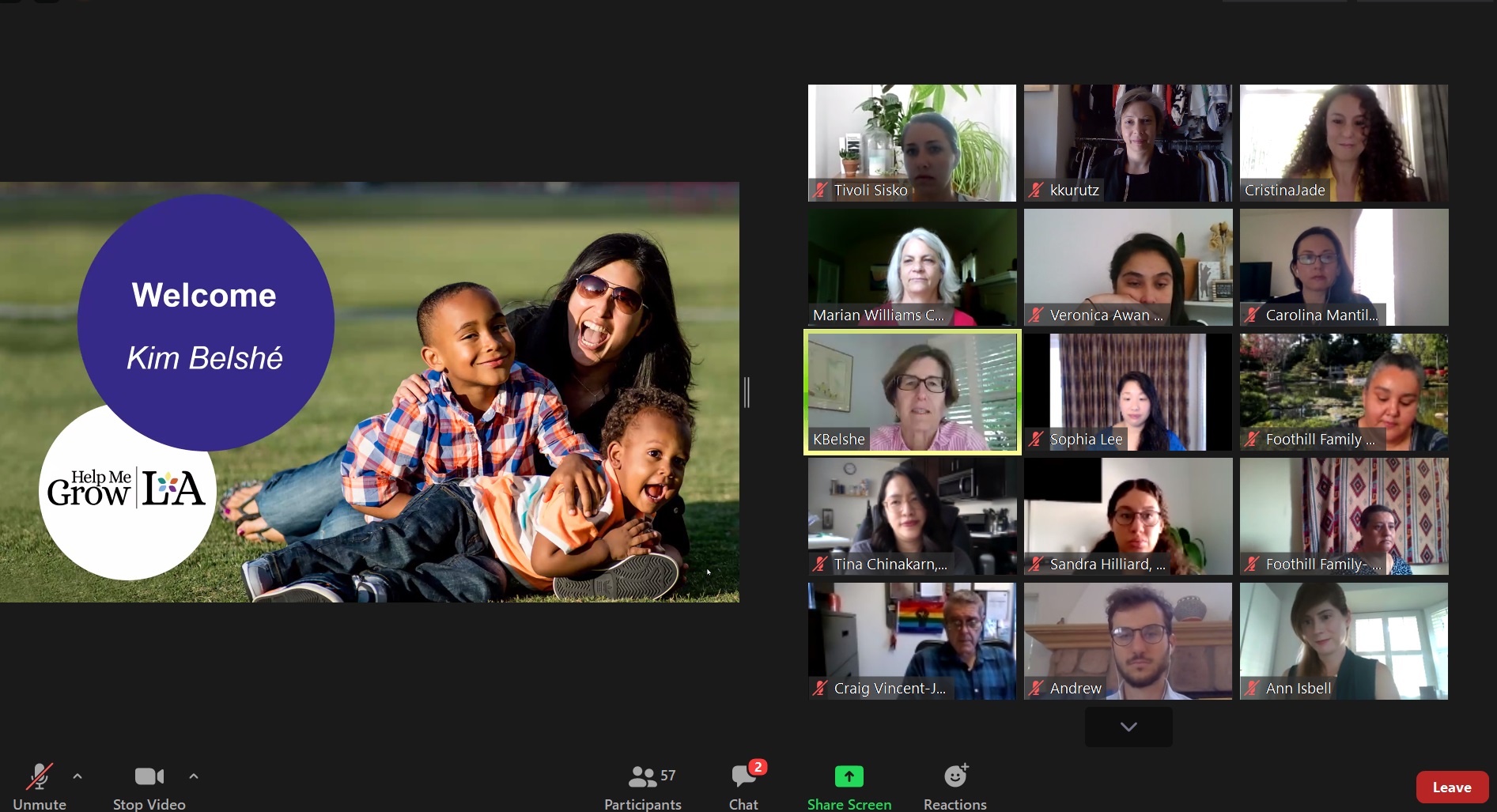 Belshé noted that the COVID-19 pandemic has highlighted existing racial disparities in screenings and access to services. Moreover, lower vaccination rates during the pandemic show that fewer parents appear to be bringing in their children for well-child visits, so children are not receiving routine screenings for developmental delays. These factors increase the urgency of the screening initiative, she said.

“We’re at an important pivot point in our work together over the last six years,” she told the forum. “We have to accelerate what works. Our toolkits to develop developmental screenings are evidence-based and have been validated.”

Developmental delays occur when children do not reach important growth milestones, such as crawling, speaking, problem-solving, and using crayons and scissors, on time. Some 30 to 40 percent of children in Los Angeles County are at risk of developmental delays, which is higher than the statewide average of 25 percent, according to the First 5 LA issue brief, “Linkage to Services and the Referral Process.” According to the brief, many children do not receive services until they enter kindergarten, although they stand a greater chance of improvement if issues are addressed earlier. If they do not receive help, children can develop ongoing and more severe disabilities throughout their lives.

The new 11-step toolkit for pediatricians, which was co-developed by experts at the University of Southern California University Center for Excellence in Developmental Disabilities at Children’s Hospital Los Angeles and First 5 LA, lays out detailed steps to establish a new developmental screening initiative or to refine existing screening practices to strengthen quality and effectiveness.The USC team at Children’s Hospital Los Angeles also provides training and technical assistance to the six agencies funded by First 5 LA to carry out screenings.

The toolkit outlines three major phases to set up an initiative: planning, launching, and finally evaluating, refining, spreading and sustaining. The phases include steps such as identifying staff members who will conduct screenings and linkage and engaging parents and planning for conversations with them about their children’s developmental health.

Tomas Torices, executive director of the American Academy of Pediatrics California Chapter 2, which represents Los Angeles and six surrounding counties, said his organization will promote use of the toolkit to its membership. “I’m sure many of our pediatricians will find this toolkit very useful in their practice,” he said.

The forum also featured the preliminary results of an evaluation of First Connections by Harder+Company, a community research firm in Los Angeles.

Early findings show that the turnover of employees trained to conduct screenings was an issue, as well as material for parents in languages other than English. About three-quarters of the children screened were Latinx.

In focus groups, the vast majority of parents said First Connections helped them understand the importance of developmental milestones, the services available to them, and the behaviors that indicate delays, said Harder+Company researcher Carolina Mantilla. 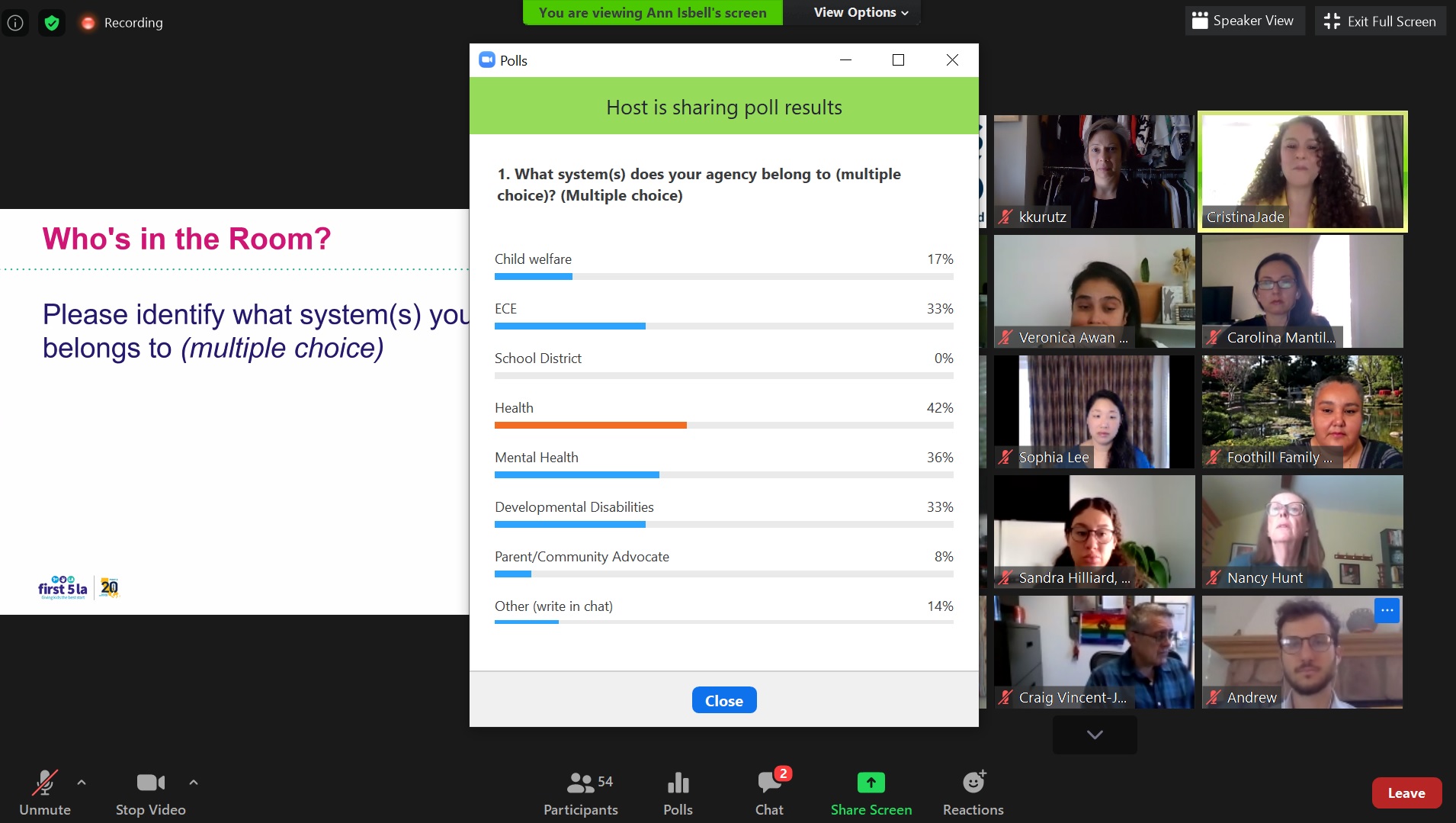 Additionally, screening agencies found that coordinating the care from referral agencies was time-consuming but key to ensuring that appropriate services were provided. Parents said that while they appreciated the follow-up, they wanted a more centralized system with stronger connections between the screening agency and service provider.

Some parents said they were also concerned by the possible stigma of “labeling” a child with a developmental issue. “Parents can be hesitant to accept the diagnosis,” Mantilla said.

One mother said she had to lie about her child’s therapy visits because the child’s father did not approve of therapy, Mantilla said. “Shifting stigma is a time-consuming and intensive process,” she noted.

Distrust of official agencies can also be common issue in low-income communities. An audience member highlighted this obstacle and called out the importance of having authentic conversations with parents as a way of changing this perception.

Sandra Hilliard, a research consultant with Harder+Company, said Children’s Hospital Los Angeles has trainings on how to have difficult conversations with parents. “Providers have to factor in time to have these conversations and where to have them,” she said.

Marian E. Williams, an associate professor of clinical pediatrics and psychology at the University of Southern California, leads the First Connections technical training and assistance project at Children’s Hospital Los Angeles. Williams said her own survey of 62 Latinx parents found that First Connections is viewed favorably by 90 percent of respondents. The survey also reported that, of the 91 percent of children who were found to have developmental issues, 92 percent received services. 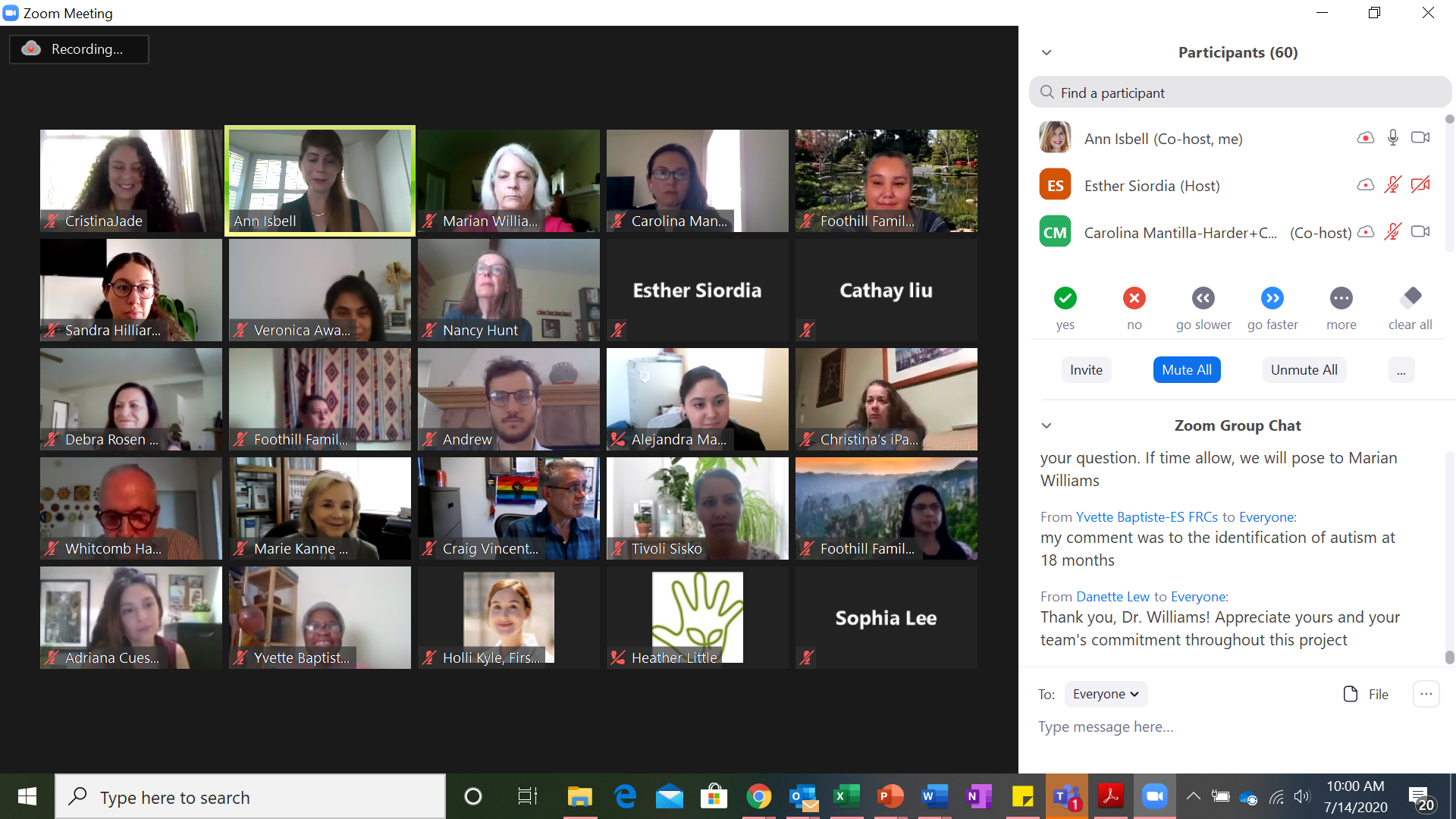 She also found that providers often have problems lining up referral agencies for services and that greater outreach to Asian parents is needed.

First Connections is currently working on a similar toolkit for family-serving agencies, which will provide education and support to families, with a third toolkit for family resource centers —community-based hubs that promote well-being — to follow. All toolkits will be available free of charge on First 5 LA’s website.

In other early identification and intervention projects, First 5 LA plans to launch in October HMG LA Pathways, which is aimed at strengthening the network and referral pathways among early childhood intervention providers through collaboratives. Another project involves a partnership with L.A. Care Health Plan to increase public knowledge about developmental health among families and support the adoption of developmental screening and linkage at high-volume pediatric clinics and with providers.