Fighting the Fat Genes with a Few Healthy Choices

We didn’t drink a lot of soda or juice growing up, but we also didn’t eat a lot of vegetables or fruits. My family of four ate out at restaurants most nights and, when left on my own a teenager to make lunch, I often opted for a bag of Doritos, a Twix and a Pepsi from the student store.

Then, I got to college. A lot changed in my early 20s, including my body. I went from a size one my freshman year to an eight my senior year. I had heard of “the freshman 15,” but this was ridiculous. 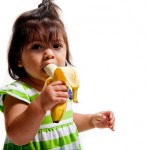 Luckily, away from home and under the influence of friends whose families ate better than mine, I started trying healthy and delicious new foods. I also took on the painful task of weaning myself to diet soda and nonfat milk.

I look at my two perfectly-proportioned, active boys and can’t imagine them overweight. But, the tendency is there, rooted deep in their DNA. There are some foods that are good for them, but dangerously fattening for me — like peanut butter, cheese and yogurt. With their active lives, fast metabolisms and developing brains, they can eat more of these foods than most adults.

However, I know what lies ahead for them. I’ve seen their gene pool, and it’s large. To try to stave off as much chunk as possible in their adult lives, we’ve adopted healthy eating habits now that will hopefully set the stage for a lifetime of nutritious choices. So we serve skim milk, reduced-fat cheese and low-fat yogurt and sour cream. We don’t allow sugar-sweetened cereals and use lite syrup on pancakes and waffles. And, we don’t give them soda — EVER — and only approve juice on special occasions.

Sure, the lighter versions don’t taste as good as their full-fat counterparts, but the idea is that the kids won’t have to go through the same taste bud training that I did when I forced myself to switch to diet and nonfat drinks.

You can’t monitor every drop of liquid or morsel of food that passes your kids’ lips. I’ve cringed at some of the food and drink choices daycare providers and preschools have made for my boys. And, admittedly, we turn a bit of a blind eye at the grandparents’ houses or at birthday parties. You have to let them be kids and have treats. But, if you teach moderation, you’ll have set them up for a lifetime of healthy choices.