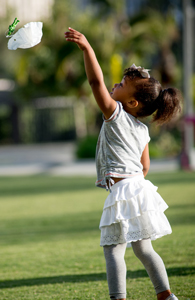 When Mark Lopez’s daughter, Xole, was only 8 months old and having trouble breathing, he took her to the doctor. When the doctor prescribed an asthma medication, Lopez asked if Xole had asthma.

“The doctor said, ‘No, but given where you live, you’re going to need this medication,’” Lopez recalled.

Lopez and his family live in East L.A., which, according to the U.S. Environmental Protection Agency (EPA), contains one of the top 10 polluted zip codes in California. And despite great strides by California to protect the environment in recent years, a new report released last month shows that much more needs to be done in order to make Southern California counties safer and healthier for young children.

New data from kidsdata.org shows that ground-level ozone, which is created from car and power plant emissions (and the main part of what makes up smog), continues to pose a major health risk for all, especially children. The report pointed out that counties such as Los Angeles and Riverside “experienced more than 40 days with ozone levels above the U.S. regulatory standard.”

Research shows air pollution has long‐term effects on the health of young children and infants, who are still developing and spend more time outdoors. Air pollution is closely associated with respiratory infections, lung cancer, cardiovascular disease, low birth weight, and the development of asthma – an especially relevant concern in California, where asthma is the primary cause of school absenteeism.

Additionally, the kidsdata.org report finds that Southern California also has some of the highest rates of particulate matter concentration in the air, which includes chemicals, metals, dust, and other components.

“Air pollution is one of the biggest issues in our community, specifically for children between the ages of birth to 5. Because of the lung development at those ages, the high level of exposure has a lifelong impact.” – Mark Lopez

Air quality has long been a concern of parents living in First 5 LA-sponsored Best Start communities that lie at ground zero of L.A. County’s air pollution problem. In Best Start East L.A., for example, a Community-Based Action Research (CBAR) report released last year revealed that 9 out of 10 residents surveyed consider air pollution a problem. Nearly 6 out of 10 said they believe pollution is affecting their health or the health of their family, while almost 1 out of 3 parents said at least one of their children has asthma.

Since the CBAR report was done, Best Start East L.A. partnership members have advocated for more oxygen-generating green space and other air quality improvements to their community.

“Air pollution is one of the biggest issues in our community, specifically for children between the ages of birth to 5. Because of the lung development at those ages, the high level of exposure has a lifelong impact,” said Lopez, who is a Best Start East L.A. partnership member and director of East Yard Communities for Environmental Justice. “The CBAR that was conducted was a way to raise the visibility of the issue.”

“This increased exposure to ozone, particulate matter and ultrafine particles is extremely harmful to human health, and can lead to or exacerbate asthma, particularly in children whose lungs are still developing,” Mangia said.

The Asthma Coalition of Los Angeles County is striving to reduce the burden of asthma by increasing access to quality healthcare, improving indoor and outdoor air quality, and improving asthma management in schools and child care facilities.

“Strategies that work to manage and control asthma include healthcare provider education, proper asthma screenings, asthma education in schools and day cares for staff, and home visits to identify and mitigate indoor air triggers that may be present in the home,” said Asthma Coalition Coordinator Loretta Worthington.

Reducing environmental hazards related to childhood asthma and childhood cancers would offer many benefits beyond the health and welfare of our youngest citizens, according to Galatea King, health surveillance director of the Public Health Institute’s California Environmental Health Tracking Program (CEHTP).

“Eliminating air contaminants such as traffic pollutants, particulate matter, second-hand smoke, and mold would alleviate asthma in about 280,000 children and save $208 million each year in California,” noted King.

For current air quality in your community, click here and enter your ZIP code.