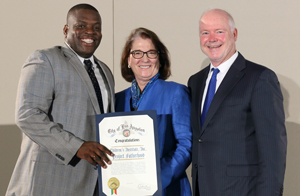 “Recovery, resiliency, and readiness, those are the terms that describe all dads here today. No one is working harder to make that change than the people in South Los Angeles,” said Nina Revoyr, Executive Vice President and COO of CII, before more than 500 fathers and community members who gathered for the conference, which was sponsored in part by First 5 LA.

First 5 LA sponsors numerous conferences and events per year, like this one, as part of its effort to strengthen families, which improves the lives of young children in Los Angeles County.

“You have to be resilient and just show up. We encourage fathers from that viewpoint and we move forward from there.” – Jeffrey Williams

The theme of the conference this year was the importance that fathers play in the lives of their children, families and communities. This is a theme familiar to CII, whose grassroots program, Project Fatherhood, gives urban and culturally diverse fathers an opportunity to connect with their children and play a meaningful role in their lives.

According to CII, studies have found that children without fathers in their lives are more likely to live in poverty, use drugs, drop out of school, develop emotional and behavioral problems, and be incarcerated.

“On the other hand, father involvement in schools is associated with a higher likelihood of their children excelling in school and getting mostly A’s,” said Jeffrey Williams of Project Fatherhood. “You have to be resilient and just show up. We encourage fathers from that viewpoint and we move forward from there.”

Workshops were filled, as everyone from fathers to family service providers to child advocates engaged in different sessions.

Participants gained new knowledge and gathered resources from several workshop tracks. These included: Fatherhood Impact on Early Childhood Development, related to the direct impact fathers have on their children’s cognitive, social, and emotional health; Fatherhood and Child Welfare, focusing on services to fathers and their families through community-based and child welfare programs; Inclusion and Cultural Competency, which advocated acknowledging and valuing our differences; and Just for Dads, which was designed to help fathers, stepdads, grandfathers, single fathers and divorced dads become better role models.

Some of the key lessons from the workshops included facing barriers to father involvement, how to make room for dads to thrive as fathers, and encouraging fathers to think about their relationships with their own dads and how this impacts them with their children now.

“Attending these types of programs has really helped me a lot. I have five children and I’m more confident as a father now. I talk with them more and I play with them more. I’ve learned to be patient. Before, I would just tell my children what to do. Now, I have so much patience and I tell them, ‘I’m here to help you and to teach you,’” said father and Project Fatherhood participant Francisco Canales from Los Angeles.

“There is an importance and a value to getting good men involved in the life of children. It doesn’t matter whether you’re a parent, an educator or a child service provider, you are the keeper of the key that will unlock the scenarios to reduce the risk of fathers being absent,” said Patrick Mitchell, a conference speaker and fatherhood expert from Down To Earth Dad, a national organization that helps to empower parents to build strong bonds with their children.

“Whether you’re a father, a child care provider, a social worker, a dad, mom, or uncle, today was not just about a training but about the celebration of ordinary heroes. Never doubt that your kids need you and that you are appreciated,” Revoyr added.

“It’s important, as men and fathers, to acknowledge our journey and to honor our sacredness. We need to communicate and be in dialogue together,” said Jerry Tello, director of the National Latino Fatherhood and Family Institute. “We are taking the responsibility for a future generation of fathers and leaders. Let’s make a commitment to live with less pain and to have more blessings.”