Eat Healthy, Grow Strong: Would You Rather Have a Banana or a Scooby-Doo Stickered Rock for Breakfast?

When my younger son was about 15 days old and his brother was 2 years old, my husband and I watched a shocking episode of Dateline where preschoolers were asked to choose between foods.

First, they chose between cupcakes: one with an American flag design and the other with Elmo or Spiderman. The character always won. Then, they were asked to choose between a banana covered with Disney princess or Scooby-Doo stickers and a plain cupcake, and the stickered banana was chosen each time. Last, they were presented a plain banana and cartoon character sticker-covered rock and asked which they’d rather have in their lunch box. Guess what? They all chose the rock. 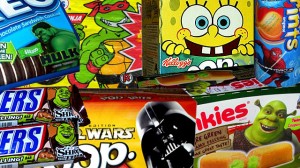 My husband and I, who considered ourselves savvy to the tricky ways of marketers, had never encountered this issue. And we were shocked to see the kids, one after the other, choose food based on what it looked like. Our older son was still pretty shielded at that point from television, except for DVR’d episodes of Dora the Explorer. We never bought shoes or shirts with cartoon characters on them and we never wanted to encourage any obsessions with these characters. We knew that eventually these icons would be discovered, but we didn’t want to speed up that process.

And with good reason. Like that Dateline show, we knew the power of marketing on children. The American Academy of Pediatrics places a large part of the childhood obesity epidemic blame on food marketing, and a recent study found that preschoolers were more likely to “nag” for junk food in the grocery store based on product packaging, cartoon characters and exposure to commercials.

It is our job to ensure that the kids eat healthy, and we always keep the junk food to a minimum. As they grow older, watch more television and play video games and begin to like what their friends like, it only gets harder. But if you set the ground rules at the beginning and stick to your nutritious shopping list, it does get easier. Eventually, they stop nagging (as much) for the Star Wars fruit snacks and eat the plain, fresh apple. I can’t say it ever stops completely, but by being consistent you can win against the powerful food marketing force and be sure your kids are eating healthy and growing strong.

Click here to read a full transcript of Dateline’s Who’s to blame for the U.S. obesity epidemic? —including a link to a five-minute video of the kids making their food choices.