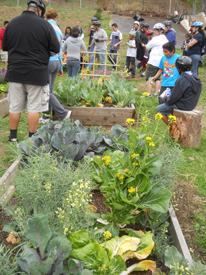 Whether community gardens are sprouting up in record numbers in Los Angeles because they are a hipster trend or a necessity for survival, the ability to grow fresh fruits and vegetables in the concrete jungle is a valuable and healthy movement.

“It has really been a revolution,” said Glen Dake, a landscape architect who serves on the Los Angeles Community Garden Council’s Board of Directors.

“It’s across all socio-economic levels,” Dake said, “It’s a topic in the culture that wasn’t there before.”

Dake credits the boom in community garden interest to both the bad economy and to First Lady Michelle Obama, who planted a garden at the White House and has made growing fresh produce a staple of her Let’s Move! campaign. He said all 80 gardens organized under the nonprofit Community Garden Council in Los Angeles now have waiting lists, while, in the past, only the nicest gardens in prime planting season would be in demand.

A community garden is a semipublic place that is administered by those who have plots on the land, Dake said. Each garden runs its own affairs, and will often hold monthly meetings to talk about such things as compost heaps, rules and expenses. Depending on the location of the garden and the size of a plot, a community gardener in Los Angeles can expect to spend between $3 and $15 a month.

Most community gardens begin with vacant land that is overgrown or being dumped on. Landowners are usually happy to lease the land to growers, and neighbors welcome the clean-up and quiet activity, Dake said.

While the community gardens provide healthy food for young children in the families who plant in them, they also provide a safe, natural place for children to play and learn, Dake said. In a recent telephone survey conducted by the Community Garden Council, half the gardeners reported that they had kids 6 and younger who often come with them to the gardens.

A study published last year in Journal of the American Dietetic Association found that a 12-week, afterschool gardening and nutrition program for 4th and 5th graders, who are primarily Latino, resulted in an increase of fiber intake, reduced blood pressure, a reduction in body mass index and less weight gain than a control group that did not participate. (The study was authored in part by Nicole Gatto, an assistant professor at the Department of Epidemiology, School of Public Health at the University of California, Los Angeles and a former Community Garden Council board member.) In a separate study of the same children, Gatto and her colleagues found that children who participated in the LA Sprouts program had increased their preferences for vegetables and fruits.