Children’s games may seem like they’re all about having fun, but they’re also important in a child’s development. Playing games such as hopscotch and hide-and-seek help kids develop their gross motor skills, such as running, jumping and hopping, while also teaching them how to wait their turn and follow directions. These popular games also promote exercise, which is key to keeping kids fit and healthy.

Growing up, your timing and rhythm may have been tested in a game of double dutch on a school playground. What may surprise you is the childhood jump rope game is not only popular on playgrounds and neighborhood sidewalks, but also at competitions around the world.

Double dutch, which has two people standing at opposite ends turning two long jump ropes in opposite directions with one or more players jumping inside t 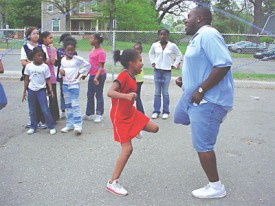 he ropes, has recently become more popular. This is due to the growing hip-hop culture, where double dutch games serve as a backdrop to break dancing, as well as the 2007 Disney Channel movie, “Jump In!,” where the game is a major part of the storyline.

The game is believed to have been invented by ancient rope makers in Egypt and China and Dutch settlers eventually brought it to the United States in the 1900s. Double dutch, also known as Chinese jump rope, remained popular throughout the 1940s and 1950s, and in the 1970s, it became even more well known thanks to the efforts of David Walker.

Walker, a detective who worked for the New York Police Department, turned the game into a competitive team sport when he organized the first double dutch tournament in 1974 with nearly 600 participants.

Today, double dutch competitions are held worldwide. Participants compete in team and individual events, along with freestyle routines, where jumpers show off their footwork, strength, and various rope movements, and speed events, where the jumper with the most jumps during a certain time period is declared the winner.

Anyone who has played a game of double dutch knows it’s harder than it looks. The game requires coordination and good timing, but with practice, it gets easier. Like other childhood games, double dutch helps children develop coordination and strong motor skills, such as jumping, and promotes good sportsmanship, competition, teamwork, and healthy exercise.

After all these years, the game remains well-liked because it’s entertaining and fun for participants and spectators alike, needs only two jump ropes and a minimum of three players, and can be played just about anywhere outside.

You may submit public comments by email to our Board Relations Manager, Linda Vo: [email protected]rg or;