Does My Child Have Autism? Autism Awareness and Action

April is ‘National Autism Awareness Month’ as dedicated by Autism Speaks, the largest autism science-and-advocacy organization in the U.S. whose mission is to change the future for all who struggle with Autism Spectrum Disorders.

The organization is dedicated to funding global biomedical research into the causes, prevention, treatments, and cure for autism; raising public awareness about autism and its effects on individuals, families, and society; and to bringing hope to all who deal with the hardships of this disorder. 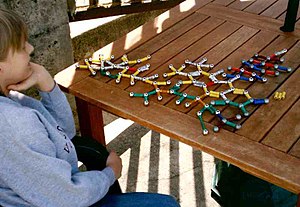 After first becoming a parent, I learned everything I could about early childhood development, vaccinations and schedules, epidemics and every other childhood disease, disorder or syndrome out there. What alarmed me most was discovering the statistics and prevalence of autism.

Autism statistics as per the Centers for Disease Control:

There are many debated theories as to the cause of autism from physical to environmental to genetic. And while there is no known cure, treatments such as a specialized diet, behavior and communication therapies and medications have been used to remedy symptoms and in some cases reverse the condition.

It is said that the signs of autism start to appear in a child most commonly between the ages of two and three years old. Here are some signs to look for:

Early detection is key and seeking out and talking to others in similar circles can be helpful. Trust your gut instinct and talk to your pediatrician, a holistic practitioner or even an autism specialist if you have even the slightest concern regarding your child’s behavior. If you are curious to know more about autism, you can start by researching more information here: