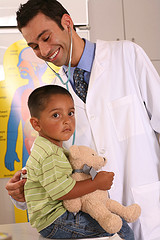 California recently experienced a whooping cough epidemic at a time when more parents are choosing not to immunize their children. Some pediatricians are taking note and refusing to see children who have not received immunizations, according to some media reports. Can a parent’s decision on whether or not to vaccinate their child have an impact on others’ health?

“When you get immunized, you are not only benefiting yourself but benefiting others in terms of herd immunity,” said Dr. Michael Siegel, a pediatrician and corporate medical director at Molina Healthcare in Long Beach. Herd immunity occurs when a large number of people in a community are vaccinated against an illness, reducing the likelihood that individuals who are not vaccinated will become ill.

An infant or toddler with no immunizations may spread certain illnesses to other children in a pediatrician’s waiting room, Siegel noted. However, this is not the only reason some pediatricians are turning away unvaccinated patients. “The most basic aspect of a patient-doctor relationship is trust,” said New York pediatrician Dr. Edward Kulich. “If I say that vaccinating is the best thing to do, and a mom says ? ??No, I don’t believe you,’ what’s going to happen when the child has a life-threatening infection and the mother is not going to want to follow my recommendations?”

The Centers for Disease Control and Prevention recommends parents immunize their children, and offers up-to-date information regarding the belief that vaccinations cause certain diseases and conditions. The reality, according to Kulich and Siegel, is that the risks associated with vaccinations outweigh the possible consequences of contracting the disease. “A 2-month-old with whooping cough can experience a brain hemorrhage and suffer a bad outcome,” Kulich stated.

For parents who are on the fence about vaccinating their infant or toddler, Siegel suggests that they consult reputable sources such as the Centers for Disease Control and Prevention and the American Academy of Pediatrics.

“Some parents have a visceral reaction against injecting a foreign protein into an otherwise healthy child,” Kulich said. “But if they’re [indecisive], getting vaccinated is the safest thing to do. It’s the basic principle of public health.”