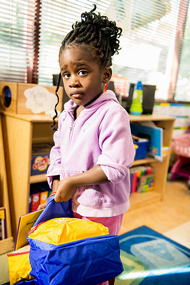 California ranks near the bottom among states in its child care policies and oversight, according to a new national report.

In the April 11 report, “We Can Do Better” by Child Care Aware of America, the Golden State came up 50th in a ranking that included all 50 states, plus the District of Columbia and the Department of Defense. Only Nebraska and Idaho scored lower than California.

Each week, nearly 11 million children under age 5 are in some type of child care setting for an average of 35 hours.

“Families want their children to be safe in child care. They reasonably assume that a child care license means the state has approved some minimum level of protection for children and that the program will promote their healthy development. Our nationwide polling shows that parents also believe there is oversight by the state,” said Lynette M. Fraga, Ph.D., executive director at Child Care Aware of America. “However, most state licensing requirements are weak and oversight is weaker. Any grade equating to a “D” or below is simply unsatisfactory.”

The average score was 92 out of 150 points – the equivalent of 61 percent, a “D” in most classrooms in America. There were no “A”s and only the Department of Defense (which also provides child care) scored a “B.” The remaining top 10 states (New York, Washington, North Dakota, Oklahoma, Texas, Wisconsin, Delaware, Illinois, Minnesota and Tennessee) earned a “C.” Twenty-one states earned a “D” and the remaining 20 states earned an “F” grade of 60 or less. California’s failing grade was a 51.

The report highlighted these weaknesses in California’s child care center policy and oversight:

“Quality programs make a real difference for children,” said Fraga. “However, it’s hard to have a quality program with little training for staff and infrequent oversight. The result is what we have today: a large gap between what parents reasonably assume and expect, and the reality of state policies.”