Child Development 101: Yawning is Contagious For Some, But Not All 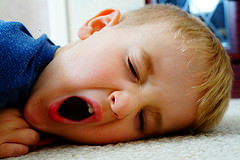 If you’re like most people, it’s hard not to yawn when you see someone else yawning. But a recent study shows that children under age 4 and kids with autism appear to be immune from contagious yawning — a phenomenon where one person’s yawn triggers a chain reaction.

The research study, published in the September issue of the Child Development Journal, was conducted by researchers from the University of Connecticut, who observed 120 typically developing 1 to 6-year-olds and 30 children, age 6 to 15, with autism spectrum disorders.

The researchers found that, although babies yawn spontaneously before they leave the womb, most children show no signs of contagious yawning until they are 4 years old.

“Given that contagious yawning may be a sign of empathy, this study suggests that empathy and the mimicry that may underlie it develop slowly over the first few years of life, and that children with autism spectrum disorders may miss subtle cues that tie them emotionally to others,” the researchers said in press reports.

The study also found about half of adults contagiously yawn.