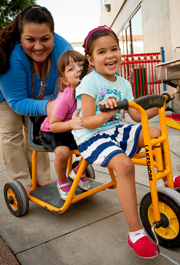 Helicopter moms – those mothers who hover over their children – may be making playtime less enjoyable for kids.

Researchers at the University of Missouri found that the more directive the mothers were during play, the less engaged children were with them and the more negative emotion the children displayed toward their mothers. The February study focused on children ages 1, 2, 3 and 5 years old.

“Children flourish when they have opportunities to make choices about what they do, particularly in play situations,” said Jean Ispa, lead author of the study and professor of human development and family studies at MU. “Mothers who are highly directive do not allow that kind of choice. In our study, the children were playing with some toys, and the very directive mothers were making the decisions about how to play, what to play and how quickly to play.”

For example, during play with her child, a highly directive mother might make her toddler put the plastic cow in the toy barn through the barn’s door instead of through its window. If a child is playing with a pretend kitchen set, the mom might not let the child touch the fake burners on the stove. Mothers often think they are helping their children by correcting them, but they are limiting the children’s creativity and possibly making their children enjoy being with them less, Ispa said.

The level of directiveness also varied with ethnicity and age, Ispa said.

When mothers were highly directive during playtime, children expressed less positive regard for their moms and more negative feelings toward them, Ispa said. The researchers also evaluated how affectionate the mothers were to their children and found that higher levels of warmth reduced the negative effects of directiveness.

To benefit their children’s development, mothers should show affection to their children while supporting their play and be careful to limit the extent to which they dictate exactly how their children should play, Ispa said.

“We know that children, regardless of culture, need to feel loved,” said Ispa. “Children take in the meaning of what their mothers are trying to do, so if a mom is being very directive and is generally a very warm person, I think the child feels, ‘My mom is doing this because she cares about me, and she’s trying to do the best for me.’ If that warmth is missing, then the child might feel, ‘My mom is trying to control me, and I don’t like it.'”