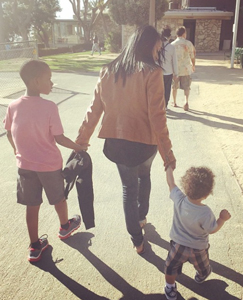 Parents of young children would probably never think of letting their child 5 years old or under walk to school alone or play in the park by themselves. But the approach parents take now can make an impact on their child’s future ability to be independent enough to do those tasks and more.

Recent headlines have prompted the question over what situations a child is considered independent enough to walk home unattended, play outdoors without supervision or be left alone in the home? “Free-range” parenting has been highlighted and criticized in recent months, due in part to Danielle and Alexander Meitiv, a Maryland couple recently cleared of neglect charges in one of two cases after allowing their 10-year-old and 6-year-old children to walk home unsupervised from a local park.

On the flip side, a father in Tennessee used a drone to keep tabs on his 8-year-old daughter as she walked home by herself.

In the state of California, there is no legal age stipulated on when a child can be left home alone or allowed to walk outside alone. There is a law, however, that children 6 years old and younger cannot be left alone in a car.

“When children are taught responsibility, respect, morality and work ethics, they become independent, and I encourage my grandkids to try new things because I don’t let their limitations define them.” – Audrey Stephens

So, what is considered lenient or overprotective when it comes raising our children? Audrey Stephens, grandmother of two and program director of the Culver City Unified School District’s Office of Early Education said after working with families day in and day out over the last few decades, she has noticed a heightened sense of fear, a lack of community, and the infusion of technology as some of the reasons why many parenting techniques are vastly different than when she was growing up, or when she parented her own children more than 25 years ago.

“We used to have neighborhoods and family ties, but now we now live a commuter society, where children spend more time in cars than they do outside playing,” said Stephens. “I grew up in the ‘50s and ‘60s and I knew everyone in my building, and we always knew someone was paying attention to us as we played.”

Helen Arbogast from Safe Kids said the key is to find a healthy balance of encouraging self-reliant skills while maintaining safety standards in order to better help children gain their independence.

“In addition to age and maturity, children need to master some skills – whether it be playing or walking alone – and they’ll need to know what steps and/or actions to take in an emergency situation,” said Arbogast, who is also the manager of injury prevention at Children's Hospital Los Angeles.

Many children under 5 can be taught to remember their phone numbers and parents’ names if they get lost at a store, a park or a community event. They can be taught not to walk away with strangers and only talk to police as well.

Similar actions – like choosing what color jacket to wear when it’s cold outside or playing in one room while a parent within earshot prepares a meal in the kitchen – can also help build a sense of independence for younger children.

Stephens said children need to be given responsibilities at a young age to help build up their independence: “When children are taught responsibility, respect, morality and work ethics, they become independent, and I encourage my grandkids to try new things because I don’t let their limitations define them.”

June is National Safety Month, and experts recommend that parents and caregivers consider the future circumstances their child will be in to determine readiness. By taking some small steps now, parents can create a safe environment that balances supervision with independence.

“Ask your child about their level of comfort, determine if they obey rules and make good decisions, and do as much practice walking or troubleshooting problems at home as possible,” noted Arbogast.

Some Safe Kids Tips for Creating a Safe Environment to Encourage Independence:

“What I believe in is parenting, plain and simple, and we have a responsibility to protect them and to make sure they don’t fall victim to predators,” said Stephens. “We should also allow children the freedom to explore by teaching them to speak up and speak out (with respect and not defiance) so that they can spread their wings and soar.”