Air Pollution Linked to Higher Incidence of Autism Among Children 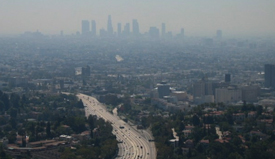 Exposure by pregnant women to traffic-related air pollution may increase their chances of giving birth to children with autism, according to a new study published in the Archives of General Psychiatry.

The study showed that expectant mothers who live near areas where the air quality is poor may be affected because air pollution can affect children’s developing brain.

“Exposure to traffic-related air pollution, nitrogen dioxide, PM2.5, and PM10 during pregnancy and during the first year of life was associated with autism,” researchers wrote in the Archives of General Psychiatry.

Researchers studied 500 children who lived in Los Angeles, San Francisco and Sacramento, among whom 50 percent had autism. They analyzed mothers’ addresses and residential history, and examined data collected by the Environmental Protection Agency from those areas, looking at levels of air pollutants.

“Our study found that local estimates of traffic-related air pollution and regional measures of … nitrogen dioxide at residences were higher in children with autism,” the researchers wrote.

The new study pointed out similar conclusions, such as previous research released in 2010 that found an association between the risk of autism and living within 1,000 feet of a freeway. Despite the correlations, researchers cautioned that their work does not offer a definitive conclusion why more children are being diagnosed with autism.

According to the Centers for Disease Control and Prevention, one in 88 children in the U.S. is diagnosed with autism. That is up from one in 110 in 2006. Although air pollution may be one factor, researchers stress genetics, nutrition and other environmental factors must also be considered.

Autism affects children in all racial, ethnic and socio-economic groups, but is more common among boys. This study shows there are associations between autism and the environment.

This new research was supported in part by Autism Speaks, an advocacy group that funds research into causes, prevention and treatment of autism.