Rafael González serves as Director of Community Relations. Gonzalez, previously Director of Best Start Communities, is responsible for leading a team that promotes awareness and understanding of First 5 LA, its mission and strategic goals throughout Los Angeles County. This includes building and maintaining relationships and identifying potential leveraging and partnership opportunities with local municipalities, school districts and civic organizations. The Department also engages and works closely with grassroots parent leaders who provide First 5 LA with feedback, insights and community perspectives as it implements its strategic plan, as well as facilitating leadership opportunities for them to influence and inform county-wide policy and systems change.

Rafael has worked in the spheres of community development, local government, corporate philanthropy, national service, civic engagement, civil rights, immigrant integration and youth development. He shares a common belief with others in the place-based field that by investing in the capacity of our families and the social infrastructure to support them, and by working from the inside out, that parents and other critical community stakeholders will improve the social conditions that impact their neighborhoods. With the proper alignment of services and collaborative systems in place, families can have a collective impact on the change we all seek.

Prior to First 5 LA, Rafael was with the Los Angeles Dodgers where he served as Director of Community Relations and was responsible for building a strong and proactive partnership with the community. Previously, he served as Chief Service Officer and Director of Neighborhood & Community Services for City of Los Angeles Mayor Antonio Villaraigosa, for whom he developed and led "We Serve LA", the civic engagement initiative of the City of Los Angeles, and directed the Mayor's city-wide field operation and community relations team.

Prior to his service in City government, González was the catalyst in the community-level change efforts of two non-profit organizations. He served as Executive Director of Public Allies - Los Angeles, a community development and service organization that created opportunities for diverse young leaders to practice leadership and strengthen communities in nonprofit organizations in Los Angeles; and Collective SPACE (Social Power through Action & Community Education), a community-based organization in the MacArthur Park/Westlake community with a mission of building an informed and active citizenry to bring about social change through grassroots organizing, education and leadership development.

Rafael was born and raised in the downtown area of Los Angeles. He graduated from Cal State University at Northridge with a Bachelor of Arts degree in Chicano Studies. He is currently completing his Master’s Degree at the USC Price School of Public Policy. He is married & has three sons.

What is Best Start and Why is it Important? 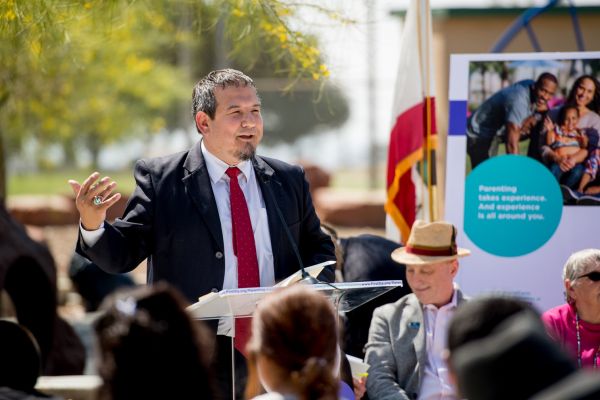 Champion for Children Rafael González: Raised on Grit and Hope by Immigrant Parents

“Whether the winds are with you or against you, you must m...